Welcome to a new series on Ragetrip Gaming. We normally ask the question, Will I Rage? Which is how I begin my reviews of games. However, This series will be less of a review and more of an initial analysis of games still in alpha or beta stages. You really can't "review" a title in my opinion until the full game is released so this series will focus on taking a first look at games that are still in their alpha, beta or early release stages.

I'd like to first thank the folks over at Unknown Worlds for generously offering a key so we could take a look at this underwater survival game. While a key was provided there was no form of compensation for this preview and all thoughts and opinions are mine alone and as always 100% genuine.


Survival games while fun have began to saturate the gaming market the same way MMORPG's did, and World War 2 shooters before that. You have Zombie survival games for days, Dinosaur survival games, Canadian winter survival games, and yes Underwater survival games. With that said I've always had a soft spot in my heart for these sort of games. Maybe it's because my fiance loves them as do our friends so they are typically games we all play together. Maybe it's because I secretly yearn for a real life zombie apocalypse so I can take off down the street decapitating zombies with a shovel while in my boxers and no one will mind. Either way, while a lot of people are (and rightfully so) getting tired of the same ol scenario force fed to them over and over.........I still have hopes for the genre. When Subnautica came across my radar I was instantly intrigued. Besides the mostly abandoned "World of Diving" there hasn't been many steps in a diving game, let alone one that looks as amazing as the trailer for Subnautica does.


So needless to say when I loaded the game up for the first time, I was pretty excited to see just how good it really was. The following is an account of my experiences with Subnautica, what I love about the game, what I think could be improved on before final release, and what I simply don't like about the game in it's current state. I hope you guys enjoy it. This is Ragetrip Gaming's premier analysis of.. 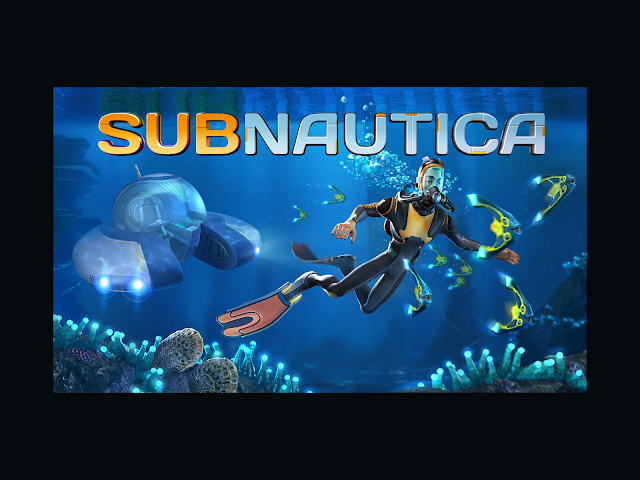 The first thing I'd like to say is that Subnautica IS very much still an early access title. This is why I've decided to start this series seeing as a full out review of an early access game feels very unfair. Instead I am taking a look at the title and examining the game play, features and such while also touching on things that I don't really love or that I think should be added to make the game an overall better experience (If there are any of these things) upon release.

Subnautica at it's core is a survival/crafting game that unlike most in the genre takes place beneath a vast ocean. When I first heard of this title I was indeed intrigued, but like a lot of you seeing several promising survival/crafting titles with promise get abandoned by their devs and/or move to a crawl speed in progression (I'm looking at you DayZ......) has left a bad taste in my mouth. I'm glad to say that Subnautica is not like that at all. In fact after receiving the key I began to take notes of different things and sadly had a couple of major gripes such as your O2 Tank not having a dedicated gear spot and taking up precious inventory space and creatures you kill not respawning. Then like magic the next day there was a huge patch that fixed both of these issues. Are there still features that need to be added and bugs that need to be fixed? Absolutely. After all this is an early access title. However, even at this early stage in development the game is very much playable, and a whole lot of fun to boot. 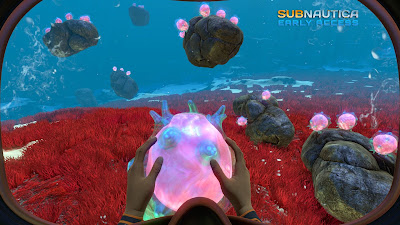 First of all..........the game world is beautiful. The sea is very much alive and you can easily get caught up in just swimming around and looking at all the pretty creatures. At night the glowing mushrooms and vines make the sea pop with a neon beauty that makes you want to swim down and relax next to the neon pink mushrooms. On a graphical level the underwater environment is a breath of fresh air in a genre over populated with Zombies, Dinosaurs, and medieval townships. The Danger aspect of this game is pretty balanced to where your cautious about getting into an encounter with the monsters of the deep, but if you must you should be able to defend yourself (as long as your reasonably geared for the area your in). I was able to pretty easily take down a stalker with my knife although I wouldn't recommend doing such a thing if you can avoid it. All in all the "feel" of the game is pretty spot on already as far as the graphics, creature difficulty and overall feel of being stuck in this strange but beautiful ocean.


The crafting system in subnautica is coming along nicely. Using the fabricator will feel like other crafting benches from survival games you've played in the past. There are a decent amount of things you can craft from the jump that will help you along in this new world. The advanced blueprints you get will also be key to eventually expanding out from the small pod you've called home into a larger more customized base. 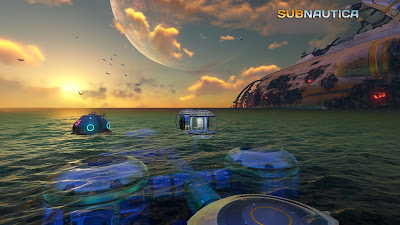 The one issue I have about the crafting in this game is that I wish there was more of it. However, regardless how much they incorporated I'd probably still feel this way. For an early access release though there is plenty to do and you will not get bored or run out of things to do or craft easily. Being able to use your welder (or another tool) to break down crash site materials into raw materials would also be a neat addition. One other thing I'd like to say about the crafting system I'd like to say and hope that both Unknown Worlds and all future dev's of games of this genre will take to heart. Upon final release I'd like to see a good variety of customization options as would a TON of other gamers. By that I mean........different color rooms and corridors, walls, possibly furniture and decor items you can craft for your base, etc. The more the better really. While some folks could care less about these features I know a ton of gamers who do very much care and would love tons of ways they can customize each base they build. I understand that should be like a last priority on the list but still feel it would be an amazing touch for the final release of the game. 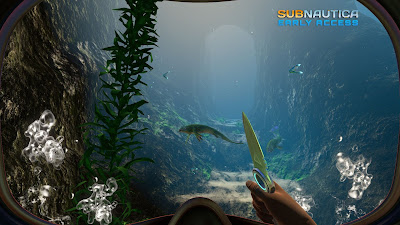 Combat in Subnautica is a lot of fun. You must be cautious.....pick your battles wisely and even when done perfectly you still feel a bit frantic fighting a sand shark. One thing I'd like to see at launch is special "high end" mats dropping as loot when you kill an aggressive lifeforms, the harder the life form, the better the mat. I don't have much more to say about the combat. It is clean, effective and works very well in this title. 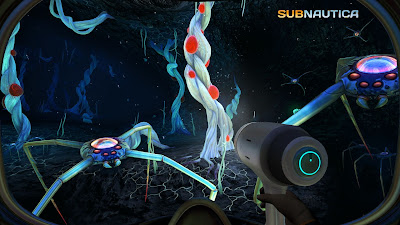 Exploration and farming is a huge part of Subnautica as it is for most games in this genre. The ocean is a vast creation of biomes that seems to go on forever, each area bringing its own threats and rewards. I guess it's because there isn't many "underwater" based games like this but exploring and farming in Subnautica feels a lot more fun for me than other genre games. Furthermore, the deeper that you go the cooler things seemingly get. Farming requires different tools (Knife for example cuts vines) and you'll spend a good chunk of time collecting different materials. While I wish there was some way to improve the size of your inventory I do like the floating storage's that you can create and leave in key places. Both exploration and farming becomes significantly more fun once your able to create vehicles (more on that later). One thing I found to be a bit frustrating is that there is no in game map that I've found. Besides that one slight issue though I find it a lot of fun to just explore the ocean while farming for much needed materials.

Vehicles in Subnautica are wonderful. When you get your first seaglide you are ecstatic at how much faster you zip around, and how your able to easily escape monsters who would have done you great harm just minutes before. When you get your seamouth you realize just how amazing this game will truly be with it's und 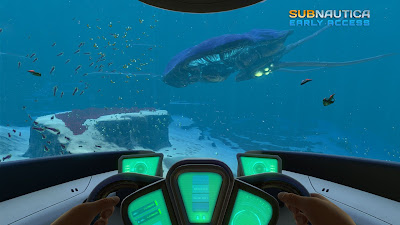 erwater vehicle and submarine system. These vehicles give you a whole lot of freedom and make exploring and farming much more manageable (and even possible at insane depths you couldn't go in the past). But always remember to have plenty of power with you. There is nothing worse than getting trapped in the deep and running out of juice! Life can be intense under the sea. 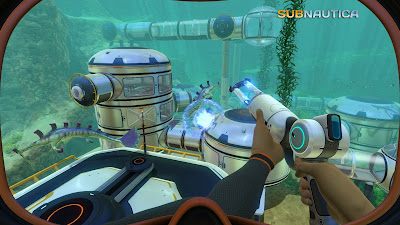 Nothing matches the feeling of accomplishment in Subnautica as the feeling you get when you get the beginnings of your first base up and running, and can say goodbye to living out of your tiny little escape pod. When you are able to start building your underwater palace, get set up with basic corridors and your all purpose room. Then finally.........solar panels! Now your cooking you think! You can now breath in your new home in the sea! Next up is to set yourself up with lockers, a fabricator, a med kit station and then you can truly forget about your escape pod (or do what I do and use it as an outpost). Building in subnautica is easier and more efficient than most survival games which is a good thing. At this early level you don't have much "customization" of your base with furnishings, decorations, etc. But I am hopeful that these things will be added when they should......once everything important is done. Base building in Subnautica even at current stages is a lot of fun and I can almost promise you that you will have multiple ones all over the bottom of the sea at different depths before you are satisfied.

I have to say that when I started this game I was filled with hope, but expected the worse. Now that I've clocked some mileage in the game and checked out most of what Subnautica has to offer I can happily say that the game is very good even in current early access state. Again, it's not perfect and there are a lot of features and additions mentioned in the article above that I'd love to see added before full release but at a $19.99 price tag with a promising Dev team and solid foundation I'd suggest picking it up as soon as possible. I think most of you will find it money well spent.


Want more Subnautica content? Keep your eyes out on ragetrip.com and our youtube channel for a lot more to come! Also check out the live twitch channel where I do play this game and many more!