I have always been fascinated with crime stories. Be it the Goodfellas, Breaking Bad, or a video game like Mafia II. I'm especially drawn to prison stories that are done right so it is no surprise when I tell you that Shawshank Redemption is one of my favorite flicks of all time. So when I sat down to play 1954 Alcatraz for the first time I had high hopes. However do to the history of games that are based on Alcatraz I was very skeptical. So now I will answer the question......."Will I Rage? 1954 Alcatraz"

1954 Alcatraz is an adventure clicker that takes you through the struggle of Joe and his wife Christine. During the game you switch and play between both Joe and Christine as Joe attempts to make his escape from the most notorious prison in America. As you may realize this game relies heavily on the story. Every action will effect how things turn out (kind of). As far as the game play and mechanics of the game they are pretty standard for this type of game. The coolest feature is the seamless transitions from Joe to Cristine. The puzzles seem to lack variety as well as difficulty making it far too easy.
Graphics 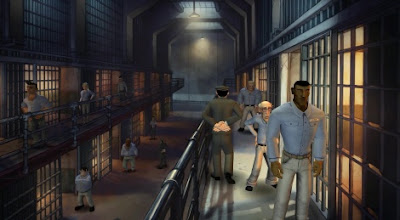 I actually really dig the graphics and art in this game. Some people may disagree but I feel it fits the story, game play and time period perfectly. I do understand some people don't like cartoonish or Artsy graphics but for this game it fits amazingly. It could be polished a bit better and made amazing but that's my biggest problem with the game is that the production values seem a bit sketchy.

This is the bread and butter of 1954 Alcatraz. The story of Joe and his wife Christine. Joe is in prison for an armored truck heist gone wrong. After an attempted escape he was sent to the rock. Throughout the game you switch between Joe and his wife Christine as both weave their way through the game world to prepare for Joe to make his big escape attempt. The game attempts to give you choices that changes the outcome but isn't very open. In fact, it's more like you take one path or the other really. The story itself is a good one however it never really captivates and feels extremely rushed. Did I enjoy it? Yes. But I wish that they had of taken their time with it more. Instead the entire game feels extremely rushed.

This game has a price tag of $19.99 on steam. It simply isn't worth it. The good news is that this game is on sale for under 5 bucks quite often. If you can get it for under 5 bucks on sale or in a bundle I'd totally suggest the game. It's NOT a bad game. It's just not really a good one either. 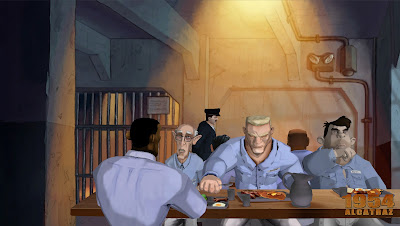 I am conflicted when it comes to how I feel about 1954 Alcatraz. I enjoyed my two runs through the game, while at the same time being let down. The colorful cartoon art style was breathtaking at moments. The music and voice acting were also surprisingly good. With the music being exceptionally flawless. Then you get a story that has a ton of potential but in reality is too short and rushed for you to ever develop feelings for the characters one way or another. This becomes a problem when making scandalous decisions doesn't make you feel the least bit bad. All in all if you can get the game on sale for under 5 bucks I'd suggest picking it up. But if you pick it up for the $19.99 price tag..........you'll probably rage.