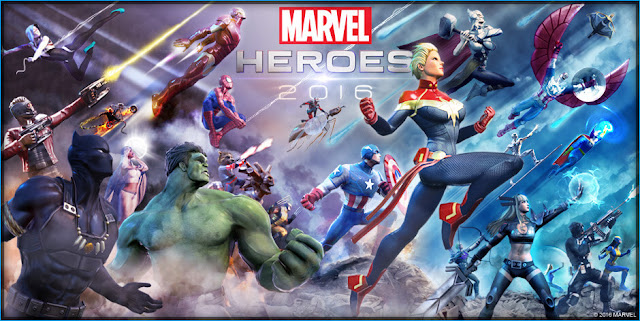 I have played Marvel Heroes since the open beta weekend. It has been a love hate relationship in the past. Many of you will remember how critical I was of the game at launch. Then, I did my yearly review for the 2015 update that you can read here. It is another year now though and another updated review. So now its time to ask, Will I Rage? Marvel Heroes 2016.


Heroes and Costumes
What's new as far as heroes and costumes go? Are they coming out in a timely manor? Have prices dropped? Did they ever release deadpool's 52 review?! Well here are some answers that will hopefully answer these questions and more. Since we last dove into the world of marvel heroes a lot has changed. Deadpool is freakin' amazing, You can run around causing tons of havoc as Venom, and Luke Cage is the most powerful hero in the game (kidding about Cage). We have seen an impressive increase of heroes that seem to endlessly come as well as playable villains (although they aren't really villains in the game). Costumes have also been plentiful with the inclusion of enhanced costumes that look amazing with custom voice packs as well. Also with the prestige system (we'll get into that later) and the addition of the 3 for 1 random costume trade you can get some of these good special costumes for free pretty much! My only gripe is that even after I pestered them during live streaming...........there is still no playable Howard the Duck........shame on you gazillion......shame on you.


End Game Content
Upon launch end game content for marvel heroes was lacking to say the least. However as you may have read in last years review it had came a long way. Cosmic Terminals, One Shots, Cow levels, X-Defense, Mid Town Madness, PVP, and Raids were all added. So what has been improved upon in this area? Quite a lot actually! In addition to Midtown you now have Industry City Patrol, and Hightown for a change of scenery on those long, lonely nights of grinding. Speaking of Midtown, Industry City Patrol and Hightown Patrol........They now have Cosmic versions which you have to actually do cosmic atonement for.......YAY! New One Shots were also added with the Bronx Zoo and March to Axis. The last of which you will mindlessly farm your butt off in to get the highly coveted Cosmic Red Skull Medallion. Another new challenge available is the "Age of Ultron" where you enter central park with a full group to battle Ultron and his army. On top of that you now have Green (Easy) versions of raids as well as Red (Not so easy). The Axis Raid was also released which from what I hear is pretty intense (I have yet to do it because......reasons.). The best current farming option at end game in my opinion (Besides raiding) would be the addition of the Danger Room simulation. It's a group run where you get different simulation drops throughout the world and then can use them to summon a portal to the danger room. Beware though, this isn't for fresh 60's. You will need some gear and/or a solid group not to get wrecked. All in all I'd say they have come out with a load of content this year for the game and I'm very impressed in my options of things to do. However I will say that Fire & Ice PVP has been in beta for close to 3 years now.


Gear, Gear, Oh Glorious Gear!
Gear optimization has come a long way also. You now have Unique Rings (Yessss!), A much more badass legendary (That you do need to rep grind for), as well as the addition of Cosmic Insignia's and your pet being able to pick up some pretty useful affixes as well. Furthermore there has been a ton of work done on uniques to balance things out as well as a ton of new artifacts introduced into the game to make your builds even trickier.


My Favorite Hero still sucks.......
Sweet Christmas! You must be playing Luke Cage (Kidding Luke Cage players......sort of......). Honestly though I've played plenty of characters since returning to the game and have yet to find one that I'd consider to be terrible like before. I'm so happy that they fixed my damn Deadpool though I may be a bit bias. None the less if your hero does suck, reviews will still happen and soon enough you will be out fighting crime with the best of them.


Every Batman needs his Robin...
Hmmm...... I probably could have come up with a better analogy seeing as this is a marvel game. None the less team ups have now been added to marvel heroes! You've got Magik, The Deadpool Kid, Spider-Man, Groot and more............and PIRATE DEADPOOL! (Check my guide on how to get pirate deadpool for free here!). Oh yes........and HOWARD THE DUCK! Now most of these will need to be purchased with G, however the best in game (Agent Coulson) and a few others can be obtained for free with in game events and achievements. Team ups can fight along side you, or you can never summon them and use them for passive buffs. They have their own gear slots, and are a very cool addition to an already loaded game.


Free Starter Heroes?!
While last year the selection of your free starting hero was better...........It was still kind of blah. This year however they now allow you your starter hero, but also the ability to level every hero to 10. This gives you a chance to play them and see if you like their style before you buy them (or spend shards on them). This feature I love. My fiance recently started playing and before dumping money on characters that she'd never play (Because she is very picky.....) she got to test them out and pick exactly what she wanted.


Ragetrip Conclusion
In a years time Gazillion Entertainment has once again surprised me with just how much work they can do in their game. Since launch they turned a game that only hardcore comic fans would stick with to one of the best (if not the best) ARPG on the market. I hope to see them continue on the path they are on in keeping this game fun, fresh and one of my favorites now. My only gripe about Marvel Heroes almost 3 years after launch is the fact that the PVP is still in beta. I understand things are more important but 3 years?........Common Gaz.......and damnit, if I don't have a playable Howard the Duck by the 2017 review I'm coming for you Brevik........lol kidding! Amazing work guys, you've earned this rating!