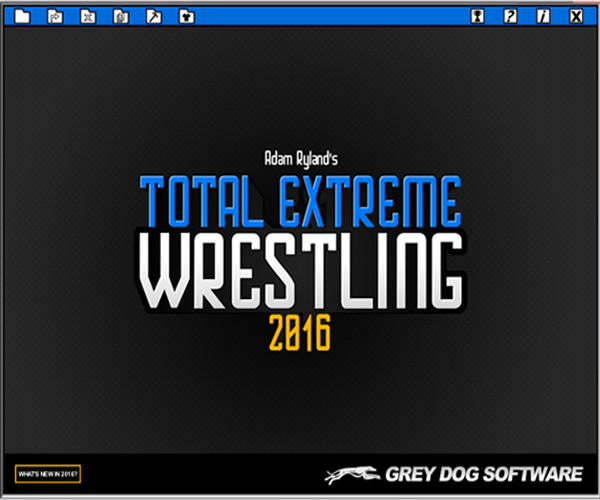 I have always personally had a soft spot for text based management simulators. So it's no surprise that back in my younger days, and days as a wrestling fan during the infamous WWF (WWE) Attitude era that I was a massive fan of the Extreme Warfare series of text based wrestling simulators. While I am not really a fan of WWE's current work, I was a HUGE wrestling fan back in the mid to late 90's, and even into the early 2000's. I was so hardcore about it that I participated in old school AOL "Chat Feds" as well as E-Feds, etc. Back then you had Extreme Warfare vs Promotion Wars, which Extreme Warfare quickly demolished. Come 2002, Extreme Warfare Revenge dropped and changed the game completely. It was brilliant and the community made it even better. I spent countless hours, days and weeks playing this game. Then something happened. I'm not sure the exact moment, but at some point the landscape of the wrestling business changed and my fanaticism for the product (Wrestling) vanished. Fast foreword to 2010. While I was no longer watching wrestling and had moved on to Mixed Martial Arts, I still had a soft spot and love for the WWE Product of old. With no good MMA titles (at the time) for PC, I decided to give EWR another shot. When searching for my old friend, I found that creator Adam Ryland had moved on and joined Greydog Software and began producing the "Total Extreme Warfare" series, which obviously was a continuation of the Extreme Warfare Series. After picking up 2010 I was simply floored with the improvements that had been made to the new series since 2002. (I hadn't played anything in the series since EWR!). It was a bit daunting, and even overwhelming at first but within a couple of hours I was hooked again. I skipped most of the 2013 game due to the World of Mixed Martial Arts series hooking me, but I did play it for a couple months and was again amazed at just how much had been added. In a world where sports games usually get a title a year, with slight graphics upgrades with an upgraded roster, it was a breath of fresh air to seeing Adam Ryland taking his time, and producing TON'S of new features with every new title in the series. With that said, it's my pleasure to to ask the question. Will I Rage? Total Extreme Warfare 2016!


Note: This key was given to me by Greydog Software for the purpose of reviewing the game. I was offered no monetary incentives, gifts, or anything else in return for a "good" review. Only a key for me to give a fair review of.


Upon sitting down to play Total Extreme Warfare 2016 for the first time, I had mixed feelings about things. I was extremely excited to dive back into the life of a professional wrestling booker, but at the same time I had to ask myself what more Adam Ryland could really do to improve on the series? 2010 was amazing, 2013 made things even better.....so would this finally be a recycled game with just a few new improvements? We will be answering that and more in this review.


First I'll touch on the "Graphics" and UI of the game which is very basic at first glance. However with just a little searching you'll find many mods to change the visuals up to something that better suits you.
If your a gimp or photoshop user and want even more customization you can always go in and create something totally specific to your liking as well. That is one of the beautiful things about Ryland's series. It's designed for the user to tweak and customize so much to their own liking from the way things look to the roster itself.


For the sake of this review I decided to dive straight into a mod-free game using the "Cornellverse" which is essentially a fictional wrestling business with made up companies, talent, etc. While I'm more of a mod guy, I can understand the reasoning of not wanting to get sued. However,  I've noticed from reading forums and talking to other players that the Cornellverse has actually became one of the key features to the series for many players and after diving into it, I can sort of understand why. It's kind of a parody on the real life business to a degree and a lot of fun in it's own right once you start digging into the game and figuring out the stars of the business.


My initial run was with the #3 rank company in the world, Total Championship Wrestling. After looking I find my top star is Rocky Golden.
An entertaining babyface with 14 years in the business, a good look and appearing to be ready to rock. After searching my roster carefully I see who I want to work a program with Rocky........His name is Wolf Hawkins, and he's younger, with a cocky youth gimmick that he pulls off very good. The only problem? Aaron "Ace" Andrews happens to be the current champion. No problem really. He's a heel, seems to be a decent draw. We'll just job him out to Rocky, while at the same time starting a new program with him to keep him out of the title picture for now. Excellent. With the Rocky Golden vs Wolf Hawkins feud however, I do not want to move into this one too fast. We are going to slow play the build for this match that will no doubt be a huge draw on the first pay-per-view under my watch. At the same time I begin to setup a nice program with Intercontinental Champion Marc Speed, and up and coming babyface Chance Fortune. For the tag team belts we begin a program of "The New Wave" vs champions "The Behemoths" who are a couple of massive, monster type heels. Happy with these initial choices, I go through the talent pool and begin the process of hiring a few fresh workers to our roster.


The number one new feature in 2016 for me is the ability to create an alliance title. With this, there is real potential for a "return of the NWA" mod in the future, along with many other possibilities. I love the old territory days of professional wrestling. Another feature I absolutely love is the filters on the booking screen. This makes booking a lot faster which was always a concern when I wanted to run through a couple of shows when I'm on a tight schedule. On my first show I decided to go ahead and book Rocky Golden vs Aaron Andrews for the world title with a run in on Rocky after he cleanly wins the title by his new nemesis Wolf Hawkins thus beginning their epic feud. A great match, with the Intercontinental and tag feuds also beginning this week put this show in a good spot for my first event with the company. The next few shows would be carried by Rocky & Wolf declaring all out war upon each other leading up to an eventual pay-per-view match between these two titans.


However, with a genius (or possibly bonehead) decision on my part I decided to bring Mr. Andrews back into the picture. Still bitter from his title loss and being snubbed he demands a rematch for his title at the upcoming pay-per-view. This would not go over well with Wolf, who had positioned himself for his big break in the business. This is when I decided to take my character and introduce him to the audience for the first time by announcing that at the pay-per-view it would be a 3 way dance for the World Championship between Golden, Andrews, and Hawkins! This prolonging that 1 vs 1 payday between Golden & Hawkins, and giving a great main event for this pay-per-view at the same time!


Of course come the pay-per-view (which was successful) Golden managed to retain his title, setting up Golden vs Hawkins at the next big show for the strap. Once again, somehow after all these years Adam Ryland has managed to hook me once again into the turmoil, and excitement of being a professional wrestling booker. From the mid 90's, all the way to 2016 these simple text based simulation games somehow hook you year in and year out.


Rating: 5/5   I don't give out 5/5 ratings lightly. However with the amount of new features, and the mod community in TEW 2016 we have yet another masterpiece from Adam Ryland which will have TEW faithfuls playing for the next few years until the next entry becomes available. The only negative I can think of is some may think that $34.95 may be a bit steep for a text based game. However, with the amount of content available in the mod community, to the insane replay value this game has I don't think it is necessarily too much to ask.